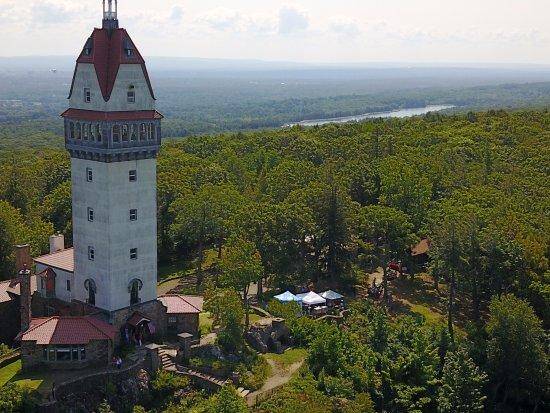 Do you love visiting locations with historic value? The Heublein Tower should make it to your list if you’re visiting Connecticut. This tower is found in Talcott Mountain State Park in Simsbury and was listed on the National Register of Historic Places in 1983.

Standing at 165-feet (50m) tall, the Heublein Tower was built as a promise by Gilbert Heublein to his fiance Louise M. Gundlach. He was hiking with her on Talcott Mountain when he promised her he would “build her a castle there one day.”

At the top of the tower from the observation lounge, one can experience panoramic views of the Hartford Skyline and other surrounding areas that look beautiful, especially in the fall. You can see for several dozen miles in all directions.

Did you know that the pronunciation of the Heublein Tower is debated? While the Heublein family came from Germany (where they pronounced it “HOY-bline”), it was pronounced as “HIGH-bline” over the years after they immigrated to the United States.

Regardless of how you wish to pronounce it, the Heublein Tower can be experienced by everyone, and is a popular tourist destination.

The tower was built in 1914 by T. R. Fox and Son and was designed to survive 100mph winds. It became Gilbert Heublein’s summer home and retreat during these years, standing as an architectural “marvel” with a model similar to the structure of Heublein’s buildings in his native Bavaria homeland.

Heublein Tower became known as the “Times Tower” when The Hartford Times purchased it in 1943. Initially, the plan was to use the tower as a broadcasting location, but this wasn’t the case. Instead, the newspaper hosted various parties and social gatherings here for about 20 years.

There have been several restoration efforts involved with preserving the Heublein’s Tower tourist experience and historic feel. After all, rumors once circulated that Gilbert Heublein used a spotlight on top of the tower’s cupola to inform German ships where allied vessels were located during World War I.

When you visit the tower, you’re not only leaving with memories of the stunning panoramic views, but also a historical experience that will remind anyone of the 1900s.